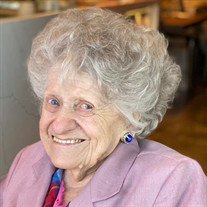 Born November 3, 1933, in the small town of Inwil, Switzerland, Annemarie Stuber-Bucher grew up loving to ride her bike, ice skate, sew, sing, play the guitar and mandolin, and perform in theater. Her father was the postmaster of the region, so she grew up knowing everyone in town and beyond, even helping to deliver the mail on her bike when her father needed additional help. Her heart always held a special place for the country and mountains she first called home. She immigrated from Switzerland to the United States in 1956 at the age of 23 after completing her education as a fashion designer/seamstress in Luzern, Switzerland. As her first job in the United States, she worked as an au pair in San Francisco for the Bullis family caring for their 6 young children. While she took care of the children, her future husband was employed as the chauffer and gardener for the same family. Ultimately, she married Josef Bucher, also from Inwil, Switzerland, in San Francisco on December 27,1958, at Saint Cecilia's Catholic Church located on 17th Avenue in San Francisco near the Bullis family Sea Cliff home where the reception was held in their ballroom. In January of 1959, they settled in Healdsburg, California, and went on to have 3 children that they raised on a dairy farm just outside of town which they built together and grew into a successful business. While serving in many roles including head bookkeeper for the farm for many decades, Annemarie also sewed beautiful clothing for numerous customers. She will always be known for her amazing seamstress talents which she used to clothe her children during their younger years. She even made special gowns and wedding attire for her children and friends and for her grandchildren’s school plays and special events such as First Communion. She was a stellar cook and baker and always enjoyed celebrating with others, especially family. Annemarie was very proud of her Swiss heritage, always baking traditional Swiss goodies and making special Swiss dishes that even to this day several of her grandchildren request on their birthdays. However, Annemarie was also proud of getting her US citizenship later in her life. She was a strong woman with a deep-rooted faith who was always extremely generous with her time and resources to anyone in need. Annemarie is survived by her 3 children, Heidi (Guy) Benjamin, John (Diane) Bucher, and Tim (Mary Louise) Bucher, along with her 8 grandchildren: Elizabeth, Hannah, Jack, Steven, Jenna, and Mikayla, Hannah Klisura, and Tony Klisura. She adored her grandchildren more than anything in life and never stopped talking about how proud she was of all her children and grandchildren. She passed away peacefully at her home in Healdsburg on December 5, 2021, while maintaining incredible spirit until the very end. Funeral services will be held on Thursday, December 16, 2021, at 11am at St. John the Baptist Catholic Church in Healdsburg, California, followed immediately by a luncheon reception in the school gym. In lieu of flowers, donations can be made in her name to St. John’s School (217 Fitch Street, Healdsburg, CA 95448) or St John the Baptist Catholic Church (208 Matheson Street, Healdsburg, CA 95448).

Born November 3, 1933, in the small town of Inwil, Switzerland, Annemarie Stuber-Bucher grew up loving to ride her bike, ice skate, sew, sing, play the guitar and mandolin, and perform in theater. Her father was the postmaster of the region,... View Obituary & Service Information

The family of Annemarie Bucher created this Life Tributes page to make it easy to share your memories.

Send flowers to the Bucher family.