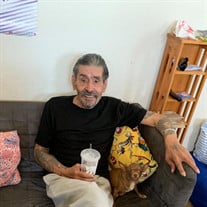 Jesus “Chuy” Alvidrez Garcia Passed away on February 9, 2022 at the age of 78 at home in Santa Rosa . He was born in Colorado City, TX and moved to Sonoma County in the early 1960's. Jesse or Chuy as people would call him, loved to “collect” things and was an avid collector of many things including coins, canes, and hats. He also had a deep love of motorcycles. His true love was Harley Davidson’s and he owned many different bikes throughout his lifetime! He was also a huge dog lover and would cherish his last dog Kiki til the end. Jesse was a deep presence to all that knew him and one thing that meant the most to him was his family! He was an integral influence and helped to raise his many nieces and nephews. While he was very loving, he was also a no nonsense kind of man! When he spoke, people listened. Jesse’s saving grace in life came unexpectedly when his great nephew Thomas was born. There was no greater love than the love and bond he shared with Thomas! Jesse was preceded in death by his Mother and father Esther and Braulio Garcia, and brothers Antonio, Ismael, Jesus (1st), Freddy, Bobby, Rudy, Braulio and his sister Amelia. He is survived by his four children Jessie, Morene, Michelle, Robert, and His niece/daughter Delia (Betty), His ex wife Rachel Moreno whom he remained friends with til his last day, and His great nephew Thomas. He leaves behind 9 grandchildren Alex, Analicia, Jose, Vincent, Clemente (Tito) Martin, Morena Rose, Dominica and Mauriana and 8 great grandchildren. He was a loving brother of Pedro, David, Manuel, Danny, Esther, Lydia, Irene, Dora, Delia. As well as numerous family members and friends. A rosary will be held at Windsor Healdsburg Mortuary 9660 Old Redwood Highway in Windsor, at 6:00 p.m. on Wednesday, February 23,2022. The Funeral Mass will be at 11:00 a.m. on Thursday, February 24, 2022, at Our Lady of Guadalupe Church 8400 Old Redwood Highway in Windsor with a burial to follow at Shiloh District Cemetery in Windsor. A celebration of life to be announced.

The family of Jesus Alvidrez Garcia created this Life Tributes page to make it easy to share your memories.