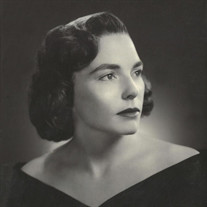 Mary Louise Williams was born in Pasadena, California, on June 5, 1928, and passed away on December 21, 2021, at the age of 93. Mary Lou spent 43 years in Palos Verdes raising a family of children and animals, then she enjoyed the last 23 years of her life in Norco, California. Loving animals as much as she did, it was natural that she spent her last decades of life in a town with more horses than people. Mary Lou was an animal lover, a wife, a mother, a grandmother, an aunt, a sister, and a friend. She was the daughter of Rufus Edward Stearns of Sandusky, Ohio, and Mary Virginia Gardner Stearns of Watsonville, California. She graduated from Chadwick boarding school in Palos Verdes in 1946 and went on to study Russian literature at Reed College, the alma mater of both her brother and her sister, in Portland, Oregon. While at Reed, she met and fell in love with her husband, Bill Williams, who was visiting from Colorado University in Boulder. In college, she loved skiing, square dancing, breaking the rules (a lifetime hobby), standing up for her ideals, and singing. After college, Mary Lou lived in San Francisco for a bit until her mother lured her back to Pasadena with the promise of horses. Her suitor, Bill, had moved to Los Angeles to work as an engineer in the aerospace industry. Upon her move south, he capitalized on her proximity and began courting her in earnest until they married in 1956. Together they spent 40 years in Palos Verdes, California, having the occasional martini or feud while raising four children. Mary Lou did one hell of an ape imitation. She didn’t suffer fools (“room temperature IQ” was a favorite). But her defining characteristic was her abiding love of animals. Her childhood was filled with them - a clowder of cats, Springer spaniels, a goose named Caesar Agoosetus, and a rotation of Arabian horses. As a mother, she hosted a series of reptiles: two tortoises, a handful of skinks, tarantulas, king snakes, at least one scorpion, a baby rattlesnake named Cuddles, dozens of alligator lizards, a rosy boa and a six-foot-long Burmese python. She once brought home a pony, procured at an auction, in a VW bus. Her hobbies were dog grooming, whelping, stud service, competing in any and all dog and horse events, including shows, agility, carriage driving, Schutzhund, and rescuing. Hardly a day went by when she wasn’t involved in saving some kind of animal or occasionally a house plant that someone put on the curb. Her empty nest solution in her 60’s was, ironically, birds. One whole room of the house was occupied by finches. For the past 20 years, she’s driven her mini horse in the Norco Parade. She had other passions - she was a skilled pianist, guitar player, and strong soprano. She filled her home with classical music. She worked as a Thumb Taxi driver, chauffeuring the occasional naked streaker in the 70’s, a newspaper delivery person, a dog groomer, and a medical transcriber. She also was an early adopter of breastfeeding, organic food delivery, and yoga. When her husband died in 1996, she moved to Norco and amassed a menagerie including dogs, cats, chickens, BLM burros, donkeys, horses, geese, ducks, goats, llamas, and one steer. Mary Lou refused to let age slow her down. When she was 70 and recently widowed, she gave herself the birthday present of doing something she’d always wanted to do. She hopped on a mule and rode it to the bottom of the Grand Canyon. When she was 88, she hopped on a plane and took her first trip to Europe to sing in Corona’s Circle City Chorale’s Eastern European performance tour, singing in Prague, Budapest, and Vienna. When she was 91, she was peering out at the hill behind her house at a giant rock in the distance painted like a Jack-o-Lantern, known as Pumpkin Rock. She wondered out loud, “I’d like to hike up there someday.” And the next day, she did just that. This nonagenarian hiked 1.7 miles up a mountain, with grandchildren in tow carrying her chair for rests. Mary Lou loved sitting on the front porch watching the world go by, critiquing horseback riders, describing cars, and waiting for the mail. Her most recent hobbies were correcting the behavior of her animals and looking for her purse. Mary Lou was preceded in death by her rocket scientist husband, Billy Burgett Williams (1929-1996), her athletic sister, Charlotte Ann Stearns Whitehead (1923-2005), and her generous brother, John Rufus Stearns (1931-2010). Mary Lou leaves behind four children, Laurie (Chip) Smith, Sandra (Gary) Phenning, Russell (Robbin) Williams, Susie (Adam) Hoffman, three nieces, three nephews, seven grandchildren, two great grandchildren and Josie the dog. Services will be held at noon on February 19th, 2022, at the American Legion in Norco. In lieu of flowers, donations are gratefully accepted to organizations that Mary Lou supported: Planned Parenthood, the ACLU, or the Humane Society. https://wetransfer.com/downloads/512127c6703f8792386fec98f75aabec20220218221214/17a1f71b7e437d978d2e34e847f782ed20220218221253/717cb0

Mary Louise Williams was born in Pasadena, California, on June 5, 1928, and passed away on December 21, 2021, at the age of 93. Mary Lou spent 43 years in Palos Verdes raising a family of children and animals, then she enjoyed the last 23 years... View Obituary & Service Information

The family of Mary Louise Williams created this Life Tributes page to make it easy to share your memories.

Mary Louise Williams was born in Pasadena, California, on June...

Send flowers to the Williams family.