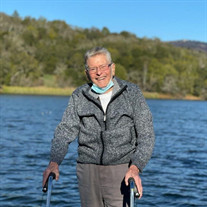 Every great man has a story. Roger Edward Honzik was born in Los Angeles, CA, second son of Charles Joseph and Christine Frances (Bussjaeger) Honzik. He passed away on April 30, 2021 at the age of 87. Roger is survived by his loving wife of nearly 63 years, Suzan (Fonnet) Honzik, his adoring children Christine (Francois) Piccin, Martin (Janet) Honzik, Kathleen Honzik, Teresa (Darrold) Fisher, Maureen (Richard) Michel, Margaret (Rychard) Jacobson, and Gerard Honzik, his brother Richard (Judy) Honzik, many grandchildren, great-grandchildren, nieces and nephews. Roger was preceded in death by his parents Charles and Christine Honzik and his grandson Nicholas Honzik. Roger’s early life was filled with close-knit extended family and wonderful adventures. Roger reveled in excursions to hunt for Indian artifacts in California’s high desert and the annual deer camp at Florence Lake. More than anything Roger loved the sea. Roger even had his own special rock where he loved to sit, look out over the ocean, and contemplate the world. Following graduation from Notre Dame High School in Sherman Oaks, CA, Roger enlisted in the United States Air Force and served as a radar operator in Germany during the Korean War. It was during this time that Roger discovered a love of photography that he used to document his travels that lasted throughout his lifetime. Roger married Suzan Ann Fonnet on August 16, 1958. They settled in North Hollywood, CA where the first of their seven children were born. In the early 1960’s, the young family moved north to Sonoma County where their family continued to grow. Roger was active in his community. The family belonged to St. John’s Parish in Healdsburg. He was a member of the Knights of Columbus and helped to organize events such as casino nights, square dances and the annual fair. Roger was a floor covering contractor and respected business owner. He enjoyed building personal and trusted relationships with his customers in every corner of his beloved Sonoma County. On his way to work Roger always found the perfect cup of morning coffee, sometimes with his children in tow. You could find him asking for a top-off at Ingram’s Chili, Orchard Inn, or Forty Karrots on the Healdsburg plaza. Roger was a devoted husband and a loving father. Whether teaching his children how to waterski on the Russian River, leading a family kickball game in the front yard, or cheering for the team at tennis matches or ball games after a long day on the job, Roger always made time for his family. He taught his children the value of hard work and how to always treat people with kindness. Most importantly to him, he gifted his children a love for the natural world, especially a deep affinity for the ocean. Roger was passionate about food and cooking. He taught his children how to flip a crepe, cut up chicken, and make sauerkraut. He explored the flavors of the world in his family’s kitchen. Roger loved fishing, not caring if it were in rivers, lakes, or the sea...he adored it all. He delighted in hikes along the ocean cliffs and backpacking trips to his treasured Florence Lake. His love of travel spanned the US and far-flung places but he always held a special place in his heart for Mexico. Roger discovered a passion and true gift for writing in his retirement years in Paradise, CA, expressing himself in a way he never thought possible. He wrote hundreds of pieces of poetry and several volumes of memoirs. Roger published over a dozen books in all. He gifted his writing to his family, believing that passing his words, memories, and childhood stories to those he loved would be one of his most-important legacies. Roger and Sue returned home to Sonoma County where he spent his last few years surrounded by his loving family. He enjoyed quiet afternoons under the redwoods or drives along the rugged coastline. Roger was never without a smile or a kind word for those around him. He is well-remembered for his impeccable ability to whistle every note in any song, his gentle sense of humor, his loving patience, and his grace in putting others first. He left this world a better place. Roger’s family will celebrate his life privately. In lieu of flowers, please enjoy one of California’s many beautiful outdoor spaces and, when there, think of Roger. Be sure he would have said, “This is just amazing.”

Every great man has a story. Roger Edward Honzik was born in Los Angeles, CA, second son of Charles Joseph and Christine Frances (Bussjaeger) Honzik. He passed away on April 30, 2021 at the age of 87. Roger is survived by his loving wife of... View Obituary & Service Information

The family of Roger E. Honzik created this Life Tributes page to make it easy to share your memories.

Every great man has a story.

Roger Edward Honzik was born in...

Send flowers to the Honzik family.